The environmental impact and carbon footprint of satellite broadcasting

At Eutelsat, each satellite distributes hundreds of television channels to millions of viewers. In recent years, TV consumption has increased drastically around the world, causing many to question the effect on the environment. Climate change and sustainability are indeed important questions to answer, so how does Eutelsat fit in with you becoming a responsible and sustainable operator?

We conducted research with environmental agency, Objectif Carbone, to understand more about these issues. The following blog post answers some of these questions, and you can find the full report on satellite TV’s carbon footprint here.

The sustainability of satellite vs terrestrial broadcasting

One solution is to extend the service of products that support broadcasting to reduce the overall environmental impact. In fact, it has become a priority for many in the industry to ensure that this becomes a reality.

In television broadcasting, a single satellite can broadcast many hundreds of television channels over an extensive area (several dozen countries), for an operational lifetime of over 18 years. The carbon footprint of satellite broadcasting does not depend on the number of people receiving the signal, unlike terrestrial technologies. This means that satellites can support broadcasters longer for less environmental cost.

Although satellite is the more efficient broadcasting option, there are still ways in which broadcasters should take responsibility to combat global warming in the ways that they can.

The reception equipment accounts for 99% of the total carbon footprint of satellite distribution. Despite technology developing rapidly, which on the one hand, adds to the issues of overproduction and harming the environment, it also produces more sustainable alternatives. The technology needed for satellite production and maintenance is no exception, with more efficient means to build satellites and other supporting technology becoming available every day. In conjunction with this is the idea that products should last longer. The satellite dish and set-top box are amortised over 10 and 5 years respectively, but in reality they are often used for longer. This adds leverage to the notion that satellite technology is better for sustainability in the long run.

So what are the best practices for television use?

As a broadcaster, there are further actions you can take to become more sustainable. Satellite or terrestrial technologies are preferable to mobile devices, which are a lot more fragile, and generate far more carbon dioxide when used. To give you an idea, an hour of video via 4G is 1,200 times heavier on carbon emissions than an hour of satellite TV broadcasting. 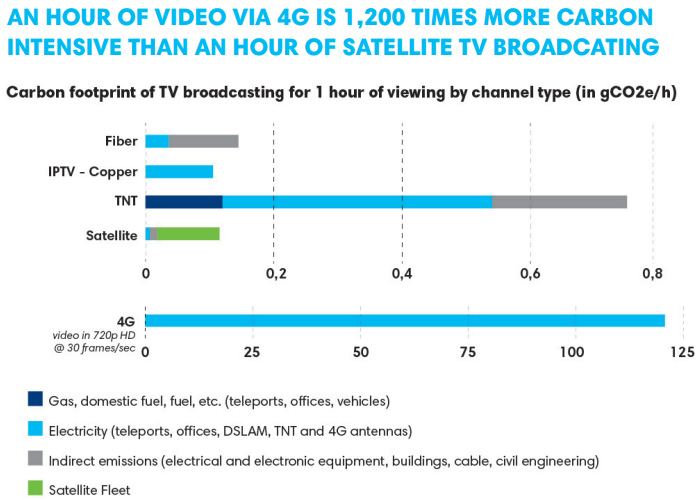 When it comes to the geographic regions in which you are broadcasting, there are also some elements to consider.

In effect, this means that the best way for broadcasters to aid the battle against heavy and destructive environmental impact is to invest in satellite technology. Especially in a post-covid world where viewers are turning to entertainment more and more.

Indicating to your customers that you care about their long-term well-being by understanding the impact of your technologies will lend to customer retention and loyalty. However, understanding these aspects and finding ways to work around technology can be time-consuming and cost-intensive. Eutelsat cares about these issues and has the resources and technology to help you work through ways you can aid the process of limiting carbon emissions with sustainable satellite technology. In 2022, Eutelsat was awarded silver for its 2022 sustainability rating from EcoVadis.

Contact us today to find out how we can guide you to being a leader in positive change or visit our page on how we fulfill our corporate and environmental responsibility.